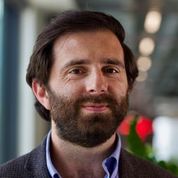 Robin Simcox is Director of the Counter Extremism Group.

Mr. Simcox previously served as the Margaret Thatcher Fellow at The Heritage Foundation in Washington, D.C., assessed by the University of Pennsylvania to be the most influential public policy think tank in the world. While in D.C., Simcox oversaw Heritage’s counter-terrorism portfolio.

Beforehand, he was a research fellow at two London-based think tanks: The Henry Jackson Society, a foreign policy think tank, and the Centre for Social Cohesion, established to study extremism in the U.K.

Mr. Simcox has testified before the U.S. Congress on multiple occasions on issues related to ISIS, al-Qaeda, and associated movements. He has also provided oral evidence to a committee of Parliament established to examine British intelligence policy.

Mr. Simcox’s commentary has been published in newspapers such as The Washington Post, The Wall Street Journal, Los Angeles Times, The Telegraph, and The Guardian.  It also has appeared in magazines and journals such as Foreign Affairs, Foreign Policy, The Atlantic, West Point’s CTC Sentinel, and Current Trends in Islamist Ideology.